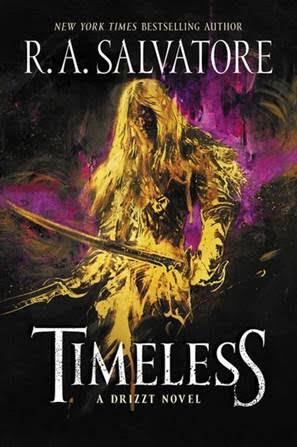 At long last, New York Times bestselling author R.A. Salvatore returns with one of fantasy’s most beloved and enduring icons, the dark elf Drizzt Do’Urden, in an all-new trilogy full of swordplay, danger, and imaginative thrills.

For any fan of Epic Fantasy or gaming, there are few characters that hold quite as much significance as Drizzt Do’Urden, the iconic dark elf warrior. New York Times bestselling author R.A. Salvatore created the legendary swordsman thirty years ago, spawning novels, video games, and tabletop gaming campaigns – and taking hold of the imaginations of countless fans in the process.

Salvatore helped shape modern fantasy, and with TIMELESS [1], he continues to propel the genre forward. It’s a rare book that can encompass a whole world as sprawling as the Forgotten Realms, while still being a welcoming gateway for new readers, but with this re-launch of Drizzt Do’Urden, fans new and old will all find common ground in this thrilling tale.

More importantly, though, TIMELESS [1] takes that which fans of the genre love best – pulse-pounding fight scenes, hordes of mystical creatures, vast arrays of magical artifacts, and heaps of adventure stories – and marries it with a modern sensibility. This is a Drizzt novel, yes, but it’s also a novel about Drizzt’s father, the famed weapon master who taught him everything he knows, and Jarlaxle, the roguish Mercenary who made Drizzt and his companions realize there was a world worth living in beyond the Underdark.

Salvatore himself is incredibly enthused by the continuing evolution of Drizzt’s saga:

“I wasn’t really ready to say goodbye to Drizzt and the gang. Even after all these years, there seemed to be dozens and dozens of stories left to tell. These characters have become like my family. I’m super excited to be able to work with Wizards of the Coast, David Pomerico and the folks at Harper Voyager to continue to publish Drizzt stories set in the Forgotten Realms.”

“Growing up, a few characters sucked me into the world of science fiction and fantasy. Ender. Garion. Tasselhoff Burrfoot. And, of course, Drizzt. So when the opportunity came around to work with Bob on a character that not only meant so much to me, but is truly one of the iconic fantasy characters, I jumped at it,” he shared.

Two years will have passed between Drizzt books when TIMELESS [1] goes on-sale, and fans are clamoring for the new installment. These novels have left an indelible mark on the genre, but clearly, they’ve made an even more lasting impression on readers. Salvatore put it best, saying “I still enjoy writing these characters and I’m interested to see where they take me next.”

[3] Play D&D in the Magic: The Gathering World of Ravnica This November & Delve into an Updated Eberron Now : https://www.flamesrising.com/play-dd-in-ravnica-eberron/

[5] Dungeons & Dragons Announces The Stream of Many Eyes! : https://www.flamesrising.com/dungeons-dragons-the-stream-of-many-eyes/

[7] Archmage, the first book in a new series by R.A. Salvatore : https://www.flamesrising.com/archmage-r-a-salvatore/