Chip: “You must really like Halloween.
Rhonda: You mean Samhain?
Chip: What?
Rhonda: Samhain, also known as All Hallows’ Eve, also known as Halloween. Pre-dating Christianity, the Celtic holiday was celebrated on the one night between autumn and winter when the barrier between the living and the dead was thinnest, and often involved rituals that included human sacrifice.
[awkward silence]
Rhonda: I like your eye patch.
Chip: Oh…”

[2]I had no idea what I was in for a year ago when I rented “Trick ‘r Treat” on Netflix. I‘d hear nothing about this film from anyone, but I read on the Netflix site that it starred Anna Paquin, Brian Cox and Dylan Baker (three actors whom I dig mucho) and the story description went like this: “In writer-director Michael Dougherty’s fright fest, Halloween’s usually boisterous traditions turn deadly, and everyone in a small town tries to survive one night in pure hell … but who will still be alive in the morning? Several stories weave together, including a loner fending off a demented trick-or-treater’s attacks; kids uncovering a freaky secret; a school principal — who moonlights as a serial killer, and more.” To me, this sounded like a potentially good time and I added it to the list.

It worked out however that the DVD didn’t arrive in the mail until November 2nd, and being as I missed the Halloween boat, I didn’t watch it till the next day. And when I did, I watched it with no real excitement or anticipation. But once the credits rolled, I was left a freaking basket case that’d just been taken on one hell of a hay rack ride! I’d just sat through and witnessed what I think is the best Halloween tale since John Carpenter’s “Halloween”, and I was blown away by it! What the hell?!? Where did this flick come from? Why hadn’t I heard of it before? I sprang into detective mode to find the story behind this baby.

Turns out that it was produced by Brian Singer (which explains Anna Paquin’s and Brian Cox’s involvement), but was directed and written by first time writer-director Michael Dougherty. Brian and screenwriter Michael met while working together on “X-Men 2” and became friends, working on “Superman Returns” together and eventually collaborating on this bad boy. Per a note I read in the Trick ‘r Treat movie book (which I’ll review in a few paragraphs), Brian stated that “I’d catch him (Michael) furtively scribbling twisted and demented sketches off in a corner of the set. One of them was a pumpkin-headed figure crawling up the margins of his shooting script, which led me to do a quick mental inventory. Was there an X-Man that I’d forgotten?” This little devil became the inspiration and one of the main characters of the movie.

And what did Michael do with this movie? Why, he created an incredible love note to all things Halloween! And as Halloween is in a close race with X-mas as my favorite holiday, I felt all the love he was sending out. The autumn season colors have never been captured better, the oranges and reds of the lit Jack-O’-Lanterns never looked more vibrant or inviting, and the tricks-N-treats the film gives out were all eye poppingly priceless! I just couldn’t stop gawking at all the Halloween beauty! And what an iconic character “Sam” is! This is the impish character Brian commented on above, and he is poised to become a Halloween icon for ages to come. I see he’s already available as a collectible figurine and a statuette on various sites, so he’s well on his way.

Plot wise, he delivered (as promised in the description) a series of short stories, all weaved into each other over the course of one Halloween night in a small Ohio town. Anyone who can appreciate small stories in batches like those found in the movie “Creepshow” or the 1985 Twilight Zone movie, or enjoys fun and creepy TV shows like Tales from the Crypt, Tales from the Dark Side or the before mentioned Twilight Zone will be in good hands here. It is so hard to make horror movies where I’m having an absolute blast one minute, only to be terrified and freaked out the next! Even when some of the stories were fairly predictable, the way they played out was priceless and I felt like I was watching these kinds of tales for the first time! The getting there is all the fun in this flicker show!

Sadly, while this film was scheduled to hit the big screens back in 2008, it never made it. Somehow the idiots that be over at Warner Brothers dropped the ball with this one, and it eventually became a direct to DVD release in 2010 (which is why I’d not heard about it till last year.) Honestly, when compared to all the crap that comes out of horror Hollywood while such a gem like this one gets ignored and forgotten, it feel outright criminal that this beauty wasn’t given its chance to shine! Sigh, perhaps a local theatre will show it someday. If so, you can bet your bag of candy that I’ll be there!

Lastly, be sure to check out the special features for a cartoon short Michael made back in the 90’s, which stars an early version of Sam. It’s a treat that any Halloween or horror fan can appreciate. 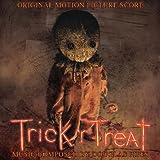 [3]Some of you may know from past reviews that I’m a soundtrack collector. Whether it’s for background music while I write (like I’m doing as I write this review for example), for use when I’m running a role playing game (NERD ALERT!), needing music while doing my chores, or to just to sit back and enjoy the emotions the music invokes, I love me some soundtracks. So it’s no surprise that my sudden obsession with this movie included getting a copy of the soundtrack.

This soundtrack was created by Douglas Pipes and its spooky and chill inducing; therefore it’s a perfect complement to the movie. It sounds fiendishly beautiful on its own (my family and I carved our pumpkins while listening to it last night) and I could detect inspiration from such haunting but beautiful scores as The Omen, Tales from the Crypt, Poltergeist, Creepshow, The Exorcist and other horror classics. One minute it’s creepy and tense, the next it adds on a quirk or pulls at the heart strings when it needs to. This film needed (and rightfully deserved) an old school horror movie sound as opposed to the barrage of high pitched sounds, strings, white noise and synthesized sounds that blare out during most modern day horror films. Fortunately Mr. Pipes was up to the task and made a truly memorable score that manages to stand on its own despite its many inspirations. I’m only familiar with one other score he created for the movie “Monster House” (which was also a great score worth listening to), but I look forward to more of what he has to offer in the future.

The Behind the Scenes Book

[5]My obsession hit full stride with getting this book in my grubby mitts. While it’s pretty expensive (I got lucky and got it half price on eBay somehow),it’s worth it as it’s over stuffed with art, pictures, anecdotes, and all the information you could want concerning this movie (along with the history of Halloween itself).
The book tells the story behind the movie, and it’s very personal and interesting as it’s told through Dougherty’s eyes. From his initial inspiration through the development process, the painstaking production design and the roots of Halloween traditions. It celebrates the yearly ritual that we all participate in but only dimly understand, explaining why we do all the activities associated with the holiday.

The book is beautifully crafted, pulls all the love and the vibes of the movie right off of the screen and into the pages, and is loaded with extra treats! By treats I mean an 8 page comic of the cartoon short with Sam is included (titled “Seasons Greetings”), post cards depicting images from the movie, a costume sketchbook, pumpkin carving templates based on some of the ones used in the movie, stickers, a “Sam” mask, and more are all hidden throughout the book! It’s the third leg to the stool that holds my cult like devotion to this movie, and if you’re a fan (or become one after reading this review and watching it) it’s a great coffee table book to have out during the season as much as it is to enjoy whenever the mood strikes you.

What else do I have to say? This one to me is now the definitive ode to the Halloween season. It fully captures all the mischievous fun, the seasonal beauty and the spook inducing feeling that makes Halloween such a magical time for both children and adults. This bag of candy is full of both tricks and treats, and I can’t get enough of them! Can you?