Undead, currently on Kickstarter, is the third sourcebook for the Chill 3rd Edition horror RPG. This week Matthew McFarland of Growling Door Games has dropped by to tell us a bit more about this book and what inspired this project.

As we (that is, Michelle Lyons-McFarland, co-owner of Growling Door Games, and I) started to plan out our proposed sourcebooks for Chill 3rd Edition [1], I noticed that one thing the 2nd Edition had promised but never produced was a book called The Living Dead. We started thinking about how that might work with our vision of Chill, and we realized that, if you’ll pardon a bit of metaphor, grave dirt is fertile soil for horror.

In planning out the book, though, I realized a couple of very important things, and they both stemmed from the same thought: the undead are ghosts with bodies. Before I get to the two epiphanies I had about outlining and writing the book, let’s unpack that thought a little. 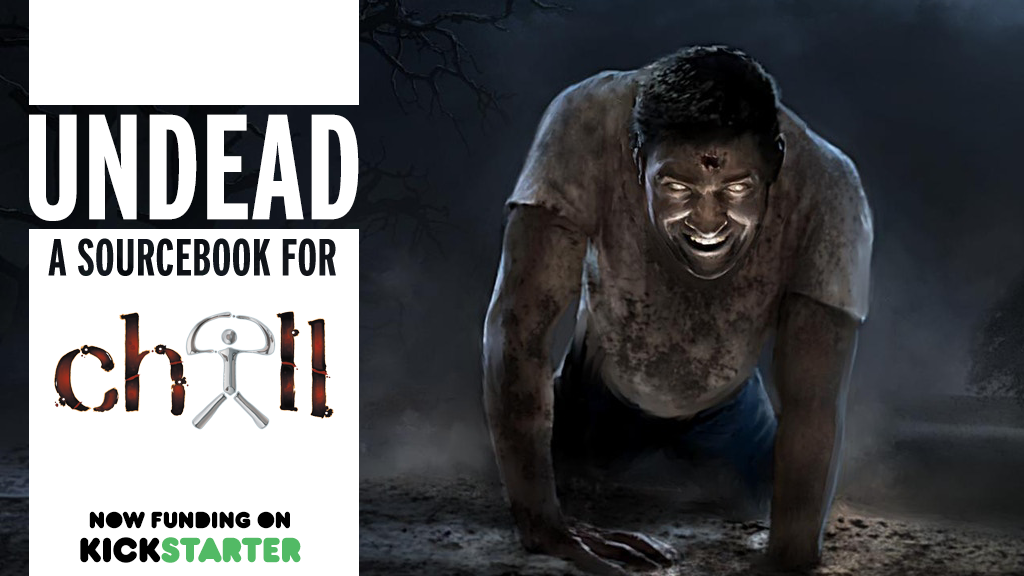 A ghost is the unfinished business of a person. In horror, a ghost can be vengeful, mournful, loving, even protective, but it’s always scary because it’s limited in the way it can interact. I think of the line in The Sixth Sense, where Malcolm Crowe tells Cole Sear that “even the scary ones” just want someone to listen to them. The undead take that to another level – a ghost can make you listen by rattling the walls, appearing as an apparition, or any number of other terrifying effects, but a walking corpse can literally pick you up by the neck and shake you, rotting lips right night to your face. Undead, then, was going to be a more visceral horror than the classic Chill 2nd Edition sourcebook Apparitions, but it was going to hit some of the same emotional notes. That just meant that getting the tone and the details right was critical.

So with that in mind, here are the two things I realized about how the book had to work:

First, I realized that I couldn’t classify the undead by their powers or by what “type” of creature they were. A “zombie” versus “edimmu” was meaningless, and besides, I don’t like mining other cultures for creatures so much as thinking about how a creature might be interpreted by a culture. Instead, I decided that, in-universe, the undead would be broadly classified by their motivation, why they returned from the grave. Here’s what we came up with:

The second thing I realized was that I couldn’t write this book by myself. Rather, I could, but it would be doing it a disservice. I flatter myself that I’m a decent writer, but I’m limited by my perspective and my experience, and the undead need some different ones.

To that end, I reached out to writers who weren’t like me. I reached out to women, POC, queer writers (queer in different ways that me), and non-cisgender writers. I wound up with a roster of authors on this book that I’m pretty proud of, and reading over their first drafts now, I can say that I absolutely made the right call. In the weeks leading up to the launch of the Undead Kickstarter [2], a bunch of them contributed blog posts about the project and their experiences with horror. You can read them here; there’s some good stuff going on.

This book is going to be scary, touching, disturbing, and bloody. I’m really looking forward to digging into the grave dirt and seeing what we find, and I hope you’ll get your hands dirty with us.

The Kickstarter for Undead [2] runs through October 31st and closes at 10PM Eastern time.