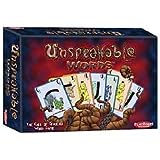 Lovecraft Aficionados are well aware of the pulp author’s use of large and obscure words; it was practically his trademark, and has befuddled eager young readers ever since he first began publishing his work in the 1920s. How appropriate then that there should be a word game using many of his creations as a backdrop — Unspeakable Words is a card-driven word game that challenges players to spell without going mad, and believe me, it isn’t easy!

Created by the talented game design team of James Ernest and Mike Selinker and produced by Playroom Entertainment (www.playrooment.com [2]), Unspeakable Words begins with each of the players receiving a hand of seven cards. Each shows a letter and a point score, as well as a Mythos creature whose name begins with that same letter. As well as the blasphemous horrors from beyond the stars, there are small, commonly used English words illustrated on the cards as hints — just in case you can’t figure out what the letter is. For instance, cards with the letter “C”, showing great Cthulhu himself, also show a small crab at the bottom of the picture as an extra clue.

The first player to reach or exceed 100 points, succeed their sanity roll and still have at least one sanity left is the winner.

Players receive five little Cthulhu figurines at the start to represent their level of sanity. To score points, players must spell English words of three or more letters using cards in hand, adding up the points for the word. Once the points are recorded, the player must then roll a 20-sided die. If the number rolled is equal to or higher that the point total of the word, their turn ends quietly; they succeed. If the roll is lower however, that player fails; they still score the points for the word, but must return one of the five little plastic Cthulhu pawns to the box. If a player loses her last point of sanity, she is out of the game! A roll of “20” always succeeds, no matter how many points the word totals.

In a nod to the Frank Belknap Long story “The Hounds of Tindalos,” letters are assigned points based on how many angles it has; the letter “O” counts as zero points, while the letter “A” is worth five. Proper nouns may not be used in the game, and the big catch is that players cannot use the same word more than once, so a note pad is essential for keeping track of words already used in a given game. Plural and singular forms of a word do count as different words for purposes of scoring. Players may, instead of taking a normal turn, discard their hand and draw a new hand of seven cards.

[1]Players score points for their words even if they fail the sanity roll with one exception: if scoring a word will take a player over 100 points, they MUST succeed on their sanity check, even if that player has sanity points to spare. If they fail their die roll their turn ends without scoring any further points, and play continues as normal. After a player has spelled a word, as long as they still have sanity left and whether or not they succeed on their sanity roll, they draw cards to fill their hand back up to seven.

Several optional rules can add to the fun. One has players with only one sanity point left be able to put down any assortment of letters and score them as a word, rolling for the sanity check as usual. After all, and I’m quoting from the rulebook here, “Unhinged folk can believe anything is a word.” Another option allows players discarding a useless hand to roll the d20 against the value of the letters being discarded. Successfully rolling higher (or rolling a twenty in any case) earns the player back one previously lost Cthulhu marker and the sanity point it represents, though players may not exceed the starting value of five sanity.

Luck does have a part to play in this game, particularly in the cards drawn by the player. This is not a true handicap however, as clever players can work the odds with decent success to stay competitive, throwing out a large word now and again to keep pace with the group’s resident smarty-pants. Unspeakable Words is an excellent game for helping people of all ages learn spelling skills in a fun way, and is goofy yet challenging enough for the whole family to enjoy. It may not appeal to everyone, but is probably the most accessible game involving the Cthulhu Mythos on the market today. The cards are of decent quality with a light, protective finish, and the plastic Cthulhu figurines are nicely sculpted and have already ended up on computer monitors everywhere.

I’ve enjoyed playing this game quite a bit; its innovative premise and amusing illustrations by Tony Steele held my attention game after game. This is precisely the type of game that, though generally of short duration, can be played repeatedly for hours at a time before players even begin to tire of it. Besides, who can resist the lure of playing with little plastic Cthulhus?

Unspeakable Words is designed for two to six players, ages ten and up. Simple and fun, it’s a great game to keep the Scrabble crowd entertained at the same time as the Role-Playing gamers, and with an average playing time of thirty minutes it’s not an intimidating commitment. At a suggested retail price of $20, it’s well worth the modest investment. I highly recommend this game across the board, and in particular as one to take along at holiday time so the whole family might actually enjoy spending time together for a change.