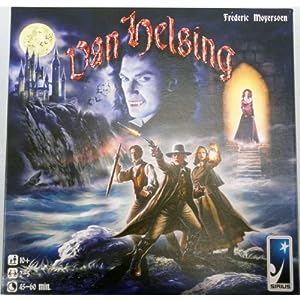 Let’s be honest; who doesn’t love Count Dracula? The cape, the sex appeal, the slick hair, eschewing modern dentistry – he did it all, including upsetting more than a few well-to-do British noblemen. In Van Helsing, one player gets to play the toothy Count, while the remaining one to four players take on the roles of Jonathan Harker, Mina Murray, Lord Godalming and Abraham Van Helsing – the Hunters.

The board is a loose grid of spaces showing three levels of Dracula’s castle. Hunters move around the board looking for Dracula and his brides. The object of the game for them is to destroy five of the eight brides, or destroy Dracula himself if they like doing things the hard way. For the Count, his goal is to either transform all four of the Hunters into his minions or kill them, or to get four of his potential brides to the coffin space in his castle.

As the game begins, the Hunters are woefully weak, and must find weapons and other items along the way. Luckily, the Count was never one to soil his hands with housekeeping, so there’s plenty of things – from crosses and holy water to rifles and first aid kits – lying around waiting to be picked up. If the Hunters are lucky, they will stumble across one or two brides in the random assortment of tiles and take them out before the Count can find them. Even though the Brides are relatively weak, they can be dangerous when assisting Dracula’s attacks. Dracula – and anyone with him – may move invisibly. That is, the player announces that Dracula is moving, then takes the Count’s marker off the board, keeping track of the ending space on a secret movement sheet provided. The Dracula player must reveal the Count’s starting location at the beginning of his turn, and if any Hunter is unlucky enough to stumble into a room with Dracula, he is revealed then as well.

The rules are brief, and English, French, Dutch and German translations are included. The translation to English is not the best; mostly these are simple word-choice mistakes that don’t detract from understanding the game. It is important to note, however, that the rules governing the use of items are covered in the Description of Objects section a the end. This is an crucial step in knowing what the objects that one starts with can do, including Dracula’s pet bats.

If Dracula is successful in turning any of the Hunters into vampires themselves, they then must work together to insure the downfall of the remaining Hunters. While it is possible for Dracula and his minions to simply kill the Hunters, it’s obviously more useful early in the game if one or more have been made into vampires. To do this, the vampire must use biting to attack the Hunter’s last remaining Blood Point. If successful, the Hunter becomes a minion. If not, the Vampire loses a Blood Point himself. In the case of Brides – who only have one Blood Point – or if Dracula or a Hunter-turned-Minion is down to they last Blood Point and fail an attack – this destroys them.

The only thing about Van Helsing that made me uncofortable is the hidden movement of Dracula. Hidden movement is, in my opinion, too vulnerable to accidental or intentional abuse, and this situation can often bring a game to a screeching halt. A word to the wise should be sufficient: Dracula players, be scrupulously careful counting spaces when using hidden movement.

Strategically, the Characters need to stick together for protection while they gather up a couple of useful items apiece. They have to destroy five brides as one way to win, so flipping over as many item tokens as they can is a sensible strategy. The Count needs to collect his brides as quickly as possible by turning over the same item tokens the Hunters are searching through. The down side to this for the Dracula player is, of course, revealing where potentially useful items are in the castle. That also allows the Count to use those tantalizing items to lure or trap one or more Hunters. The Count would also be advised to take out one of the Hunters immediately, before they can arm themselves adequately, but this will depend largely on luck – whether they move close enough to Dracula’s starting point for him to reach them in one turn, basically. If the Characters get lucky on their initial item draw, they could begin the game well-armed, so the Dracula player should be cautious of making frontal assaults.

Van Helsing is a fun romp through gothic horror, and the fast pace of play keeps things moving along nicely. Veteran gamers may recognize some similarity to the game Scotland Yard, and this observation wouldn’t be far off. At an MSRP of $49.00, the price for Van Helsing is in line with similar board games. The components are solid and colorful, and the included plastic tray keeps everything organized and well-protected. If you’re a fan of the vampire/gothic horror genre, Van Helsing is well worth your time to check out.

[2] The Kobold Guide to Board Game Design Review : https://www.flamesrising.com/kobold-guide-bg-design-review/