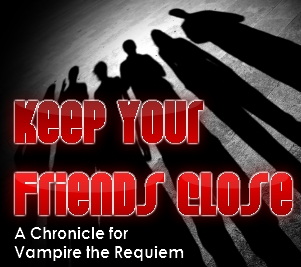 In this episode, Lavender and Blake deal with the contents of the boxes and catch up on some old business with Kyle.

Lavender and Blake head over to Bootlegger’s, a kind of a blue collar-ish sports bar, to catch a quick bite to eat. Trying out her new “toy,” she tries to put the one-word whammy on a college kid and fails miserably, so she goes for the gold and entrances him. Leading him out to her car, she has a quick bite and wonders how to make better use of “Dominate.” After having a quick bite, she takes the mortal over to Coyote Ugly and dumps him in a sea of waitresses. On the way back to Bootlegger’s, Lavender notices Blake heading out with another woman, so she heads back to her apartment and finds a bunch of new books on the shelf. While she’s waiting for Blake, she skims through the titles looking for information about the ghost rock. Blake ends up rolling in, and they chat about last week.

Blake asked Ms. Raines about the owner of the journals and it appears that she might be on the West Coast. Lavender recommends we ask Judith Lagerman if she knows how to get in touch with her. Changing the subject, Lavender asks Blake if he was able to get through to Kyle. Apparently, Kyle has a few leads and was going to check it out this week. Lavender mentions that they should probably follow up tonight. Kyle responds that he’s in the middle of a deal.

[1]While they’re waiting, Blake starts rattling off the contents of the crates and what they should do with them. Lavender asks if they have a full inventory of all of the items in the crates. Her concern is to ensure that the people that helped out on the dive are taken care of and that they’re not relying on Filthfoot; she has something she wants from both the captain and from Butch. They hear from Kyle, and he does have a few things to pick up but it’s not clear if they’re the files or not. Lavender doesn’t really trust Kyle, especially since she’s not sure who he’s hanging out with, and she’s contemplating whether or not she should blow the whistle on him.

As Blake and Lavender discuss the remaining contents of the dives, Lavender tries to figure out how to give Filthfoot more information about the ghost rock. She realize that she does have something to offer him, but will have to wait until they run into one another. Lavender also mentions to Blake that they can investigate the contents of the crates without being “vamps” about it; they can take pictures or research as “reporters.” Skimming through the new books on her shelf, she comes across a ward to keep ghosts out of a space, so she mentions that she wants to go to an occult store and pick up some supplies. Giovanni Callavino, a Ventrue, had set up a meeting with Blake and another individual by the name of Professor Arbighast. They decide to meet up at a coffee shop which is a couple of doors down from The Pentagram, an occult bookstore that also happens to have some ritual supplies.

At the coffee shop, we meet up with Moira, who is Callavino’s mortal assistant, and Callavino, an elderly gentleman vampire who introduces us to Professor Arbighast. The Professor is a skilled linguist and knows Russian; he asks about the date book and who the book was owned by. Blake mentions that the owner was in her mid-forties, but Lavender is concerned that the Regent’s “true age” will be revealed by the semantics of the language. Professor Arbighast asked about the murder of Anton Porter, “Blake’s” former self. Blake is a touch evasive, but seems to handle it okay. Apparently, the Professor and Anton knew each other when Anton was alive.

Mr. Callavino strikes up a conversation with Lavender; they discuss the challenges with living in Chicago and addressing the “threat level” of activity in the city. Mr. Callavino mentions that the City of Chicago has a conflux, that people are drawn to the city because of its activity. Professor Arbighast and Blake come to an agreement about the translation; Lavender hopes she has the chance to remind Blake about ensuring ways to protect the Regent’s identity.

Then Mr. Callavino swings out from left field and says, “Tell Professor Arbighast about your stone.” Lavender feels like she has just had a glass of water thrown in her face. Apparently we have an “associate” in common who told him we were keeping it safe. (FILTHFOOT!!!) Professor Arbighast is obviously uncomfortable about the meeting, but agrees to take a look at the rock. Callavino seems pretty blunt to Lavender, but she thinks he’s probably just a bit “off” and doesn’t really concern herself with his plans. Lavender confides to Blake that language is one of the easiest ways to “date” a person.

They head to The Pentagram and find a book in the Reading Only section about protective spells, which…oddly enough…had the same ingredients they gave to Holy Oak. Lavender’s first thought is that it might be a breach of the Masquerade, but she’s not sure, and she wants to explore it further during the week. Thinking about it further, she will set up a meeting with Filthfoot and ask that he ends up “visiting” during their meeting with Professor Arbighast while he inspects the ghost rock.

Blake and Lavender quickly head over to Cassandra’s Visions and pick up a few supplies (e.g. Lavender picked them out and made Blake pay). Anxiously, they wait for Kyle and discuss the shopping list for Holy Oak. Blake is offering the idea that the old Mekhet guided their thoughts; Lavender doesn’t really care whether or not he did. She’s more concerned about the book itself and the fact that Kindred-based magic has been recorded, and recommends that they get in touch with Holy Oak.

Kyle waltzes in and brings the “spoils” from the warehouse. Lavender says, “It’s now or never.” The files in the banker’s boxes are detailed information about mortals and criminals; it’s possible that a few files are also on the Kindred, but it might be a decade or two old. Lavender recommends that they copy the files and then let Kyle turn them over to the Prince to show that “he’s cooperating.” After discussing a few details about financials, Lavender notices that Kyle hasn’t really mentioned anything about the ghost rock. Lavender decides go to the kitchen and grabs some sea salt and a ziploc bag, sticks the rock in the bag and puts it back in the safe.

If you’re interested in catching up on previous sessions, read:

[6] Keep Your Friends Close: Inside the Box: http://www.flamesrising.com/vtr-inside-the-box/

[8] Keep Your Friends Close: An Ongoing Chronicle for Vampire: the Requiem : https://www.flamesrising.com/vampire-the-requiem-actual-play-1/