Walk the Plank with Eddy Webb and the Pirates of Pugmire!

Pirates of Pugmire [1] is a chronicle sourcebook for the Pugmire [2] and Monarchies of Mau [3] RPGs from Onyx Path Publishing. Useable as a a supplement for either game or as a great way to crossover the two settings with adventures on the seas and more. Pirates of Pugmire [1] introduces lizards and birds as new playable species for expanding player character options. Additionally, two new locations in the world of Pugmire are introduced and the book comes with exciting adventures to get a campaign launched right away.

Currently on Kickstarter [1] with just over a week to go, we took Eddy Webb portside for a few questions… 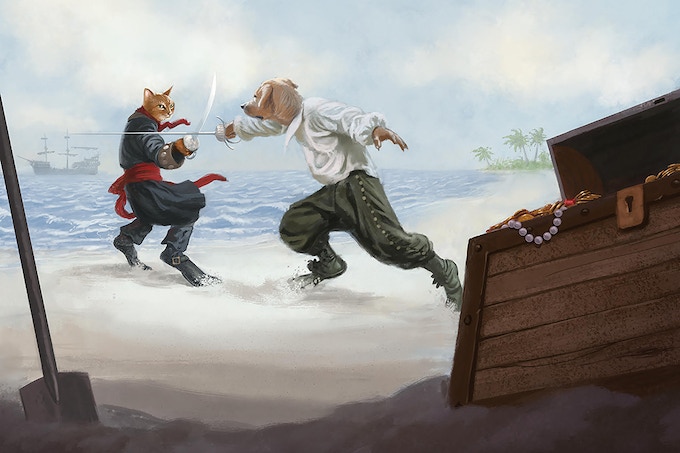 What were your inspirations for the Pirates of Pugmire book?

The most obvious inspirations were a ton of pirate media: Treasure Island, Captain Blood, The Goonies, Pirates of Dark Water, and so on. I tried to balance more traditional “adventure” pirate stories with fantastical interpretations. But I also looked at stories that had nautical themes, or just some pirate-ish set dressing, like The Princess Bride, Rat Queens, and Peter Pan. Because there’s more to pirate stories than being on a ship, and I wanted to balance that.

What can you tell us about the new player character types in the book?

Both Pugmire [2] and Monarchies of Mau [3] have “callings,” which are much like character classes. There as six more in this book. For dogs, there’s the Crusader (which is a bit like a paladin conquistador) and the Gundog (which is like a gunslinger). For cats there’s the Torpedo (which is a tougher, less dexterous gunslinger than the gundog) and the Mystic (a sea witch). Lizards and birds can play any of those, as well as the Alkalist (an alchemist that uses mystical salt for working magic) and the Rimer (a spellcaster that uses performance for magic).

Oh, and you can play birds, lizards, snakes, and turtles as well!

What about new monsters and other antagonists?

Naturally, we have a lot of sea-based antagonists: rival buccaneers, acid sharks, crocodiles, and the like. There are also some unusual fusion creatures, like the frog-monkey and spider-goats, because I never really got to showcase those in the previous games. But the big monster (no pun intended) is the Leviathan, our first CR 10 creature. But we also include rules to make ANY monster colossal, because the depths of the Acid Sea harbor creatures of unusual size!

How does this book expand the setting?

We’ll have a map of the Acid Sea, along with several key locations, naturally. But we also detail the two big port cities in the previous games: Waterdog Port near Pugmire and Port Matthew in the monarchy of Rex. Waterdog Port is the more detailed city, since that’s the more explicit “pirate free city” in the setting, because it’s declared itself independent of Pugmire. But Port Matthew gives some balance and intrigue for cat characters — a rival, government-controlled city to contrast against the wilder and more chaotic Waterdog Port. It also comes with three full adventures, so you can use all of the pieces in the book in a smooth, cohesive way. 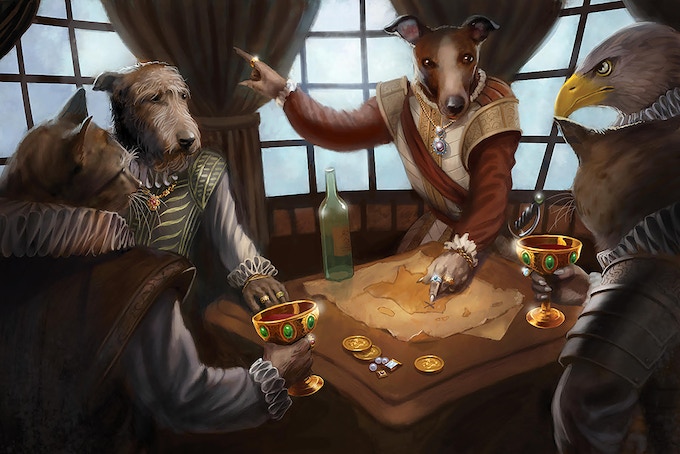 Who are the creative team that worked on this book?

Like with all the key Pugmire books, I was the developer, and I wrote the fiction in the book as well. Rich Thomas decided to act as art director on this book, to help Mike Chaney out — they both had ideas on where to take the book, but Rich and I have been working together on the overall look of Pugmire for years now, so it was nice to be able to chat about how characters should look and feel in this new part of the setting.

As for writers, I got a great team together. My Onyx Pathcast co-hosts, Dixie Cochran and Matthew Dawkins, both helped immensely, as they’re both very familiar with the setting and what I want from it. I also had a couple of established hands — Elissa Rich worked on Monarchies of Mau, and Danielle Lauzon is someone I work with regularly… and her time as the 7th Sea line developer was an added bonus. We also had two new (to me, anyway) writers: Jason Inczauskis and Travis Legge were both enthusiastic and talented writers who really helped out.

What was your favorite part of the book to work on? Why?

Honestly, it’s really hard to pick a favorite part, but I really enjoyed character creation and the rules section. It was a challenge to fit new character types, gunpowder weapons, and sailing rules into the relatively streamlined and fast-moving version of 5e D&D that I use, but I’m pretty happy with the results. I refuse to claim full credit for any of those, however — it was only when I was collaborating with the entire team that I could get those pieces where I needed them to be, because everyone had such great ideas.

Thanks and good luck!

Pirates of Pugmire is currently funding on Kickstarter.com [1] with just over a week to go as of this writing. Backers can get early access to the entire manuscript to give feedback and get playing pirate characters right away!