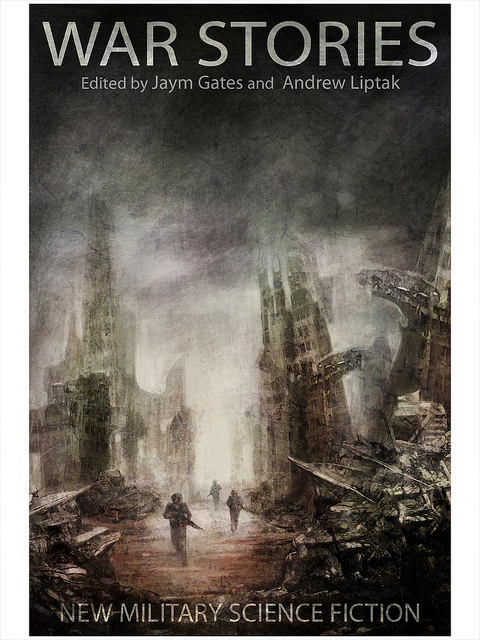 [1]An anthology of Military SF, exploring how warfare might affect the soldiers and civilians of tomorrow.

War has been speculated about in science fiction literature from the earliest days of the genre. From George Tomkyns Chesney’s The Battle of Dorking and H.G. Well’s War of the Worlds & War In the Air to Robert Heinlein’s Starship Troopers to Karin Traviss’s Wess’har Wars series and Dan Abnett’s Embedded, science fiction literature has long had something to say about war. Now, it’s time to tell some new stories. War Stories is an anthology that looks to the modern state and the future of war through the words of some of the best short fiction authors writing today.

Our cover art is by the fantastic, Hugo Award winning artist Galen Dara, who’s worked for such places as Fireside Magazine, Lightspeed Magazine, Geek Love [2] and Apex’s own Glitter and Mayhem [3] anthology. She’ll also be contributing some additional, interior artwork.

War Stories isn’t an anthology of bug hunts and unabashed jingoism. It’s a look at the people ordered into impossible situations, asked to do the unthinkable, and those unable to escape from hell. It’s stories of courage under fire, and about the difficulties in making decisions that we normally would never make. It’s about what happens when the shooting stops, and before any trigger is ever pulled.

We’ve grown up reading stories from authors such as Robert Heinlein, Joe Haldeman, Orson Scott Card, Timothy Zahn, C.J. Cherryh, Lois McMaster Bujold and others that have laid the foundations for ‘military science fiction’ as a distinct genre.

We want to tell some different stories. Science Fiction, and military science fiction in particular, is a good look at the world today, where military actions are certainly relevant. We aim to tell some new stories that look at the future of warfare, and the people, robots and aliens involved.

Andrew Liptak earned his Master of Arts in Military History from Norwich University, and has written extensively about military science fiction for io9 and SF Signal, and has written for such websites as Kirkus Reviews, and Strange Horizons, as well as Military History for magazines such as Armchair General and the Norwich Record. He is currently an editorial assistant for Lightspeed Magazine. His first story, ‘Fragmented’, is set to be published by Galaxy’s Edge Magazine.