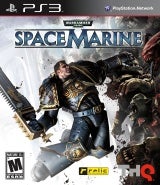 Warhammer 40,000: SpaceMarine is a game that debuted for the PS3 (and other platforms). While I’m familiar with Games Workshop, I am new to to the Warhammer universe. I feel that’s important to keep in mind when you’re reading my review.

Part of the reason why I’ve never played Warhammer or read the fiction was because my impression was that I wasn’t really the target market for this setting. It has always felt very male-dominated and macho to me. Even though I felt that way, I always gave the property a healthy amount of respect. I consider the Warhammer SpaceMarine to be the original. Period. This is where the super-soldier in gaming comes from and truth be told? For someone like me that can be a little intimidating because I like big guns just as much as the next gamer, but I also want a good story. These initial impressions were reinforced when I read the handbook. Most of the alien ork names were riffs on “boy.” A few of my fellow gamers reassured me that this was part of the game’s charm, and that I should really keep an open mind when diving in.

Is there a great story? Oh, yeah! Are these SpaceMarines different from the space marine derivatives I’ve seen in anime and other video games? Yes. Did I come away with a feeling that I was playing an ancient console game? Absolutely not. The science fiction world of the UltraMarines reminded me of what might happen if the Roman Empire never fell. There’s an order to things and a code of ethics these characters follow. Right from the start, you fill the big shoes of Captain Marcus Titus, an experienced veteran who doesn’t live by the letter of the law. He knows the spirit.

The graphics on this game are really impressive. There’s a level of detail that gives each screen a grungy, war-torn feel. But that’s not the only reason why I liked playing Warhammer, the mechanics are simple and there is a lot of ass-kicking to be had. (Just press one button for most of the action and combos for special effects.) So much butt-kicking, in fact, that one of the mechanics allows you to stun and take health from an ork to refuel. Multiple play settings are perfect for any style of play. Though, you may want to go through the first leg of the mission on an easier setting. Orks by themselves aren’t the problem. It’s the swarms and the individual boss battles that wind up making a SpaceMarine’s life difficult on a mixture of high-and-low terrains. Short on time? Don’t worry. Each leg of the mission has a mini-RPG style feel and you can play through each checkpoint and not lose out the next time you pick up your controller.

If the goal for this fast-paced third person shooter was to make the game as playable as possible, then I feel Warhammer 40000: SpaceMarine really does the job. Very easy to aim, great visual cues and auto-saves keep the emphasis on the action, right where it should be.