Water Woman: Into the Deep by Steffie de Vaan and Crissie Brown! 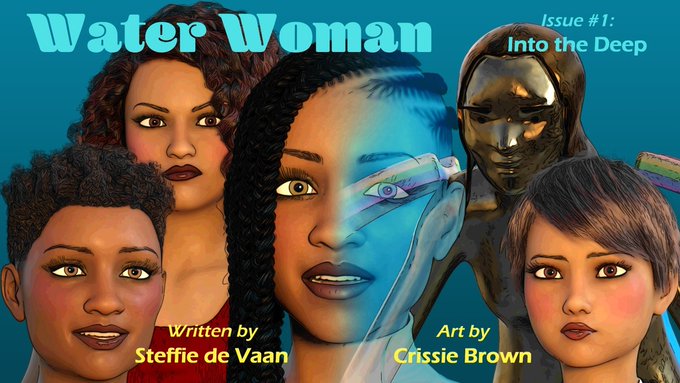 Water Woman is a new indie comic written by Steffie de Vaan with art by Crissie Brown. The two both participated in Gail Simone’s Comic School, hosted during the lockdown, and combined forces to make a joint vision come true.

Into the Deep tells the story of Niqui, a young artist living in Miami, her mom Pearl and her abusive soon-to-be ex Romain. It’s a story about escaping domestic violence, artistic creation, and renewal. When Romain knocks Niqui overboard on a trip to the Bahamas, Niqui finds herself transformed into Water Woman. After a harrowing return, Niqui must face her fears and bring Romain to justice.

“I’m so excited to work with Crissie,” Steffie said. “My writing is very ‘show, don’t tell’ and Crissie nails every single facial expression I ask for.”

“It’s not her book, or mine” Crissie added. “It’s ours. We both feel our characters and their story, so deeply. It’s a privilege to work with Steffie.”

The pair hopes Into the Deep will be the first issue of many, and have multiple concepts ready for additional issues.

Steffie de Vaan is a Dutch author and developer of role playing games and short stories, who worked for DnD 5E Legendlore, Vampire the Masquerade, Changeling the Lost, and Harlem Unbound. She loves horror, fantasy, sci-fi stories, and their cross genres in any medium. Water Woman is her first, but not last, foray into comics.

Crissie Brown has a background in theatre and novels. She began studying digital art when her agent suggested she repackage a proposed mystery as a graphic novel. The result was her first comic – Camo #1: The Key to the City.

Support Water Woman and pledge for your copy via Kickstarter.com [1]!