Women are Werewolves, a nonbinary story game from 9th Level Games is currently funding on Kickstarter (final day as of this writing, so don’t miss out!).

9th Level Games is best known as the creators of Kobolds Ate My Baby!, which has been a Flames Rising favorite for many years. We asked the 9th Level crew to tell us a bit more about Women are Werewolves…

Women are Werewolves [1] is a card-based story game where players take on the roles of nonbinary characters who belong to a family that believes only women transform into werewolves. Throughout the game, characters explore their relationships to gendered spaces and family traditions. They also explore their relationships with their queer and non-queer family members. The game asks you to navigate the various gendered traditions your family engages in and deal with the awkward questions, misguided assumptions, and occasional microaggressions that come with it. At its heart, Women are Werewolves is a game about discovering your boundaries and whether you can find, or make, a space for your authentic self within a family that might not understand you.

At the climax of Women are Werewolves [1], players are faced with a moment of choice where they decide whether to draw closer to their family or create more distance between them and their family. From the very beginning of the design process, we wanted to make sure that the game supported either choice, or a compromise between both choices, and recognized all outcomes as valid. The point was not which choice a player made, but that they were given space to explore which one was right for them.

As playtesting progressed, we found ourselves making revisions that leaned towards more openness and flexibility wherever possible while still adhering to the core premise of the game. For example, in the Introduction, we clarify the rules surrounding werewolves and werewolf-as-gender-role:

The only thing that must be true is that the family believes the women, as defined by the family, transform into wolves on the full moon and men, as defined by the family, do not. Whether the family is correct, how the family defines men and women, and whether there are other werewolf families in the world who contradict that truth are up to the players. The game does not assume any other werewolf mythologies or tropes are true. Players are encouraged to draw inspiration from whichever sources they’d like or to make up their own.

We phrased the text to make it clear where players had the choice to set the rules of the universe for their playthrough.

We’ve found that this approach is essential to making queer games. Queerness is not a monolith, and individual queer people, even ones that share the same identity, often have different or even competing needs surrounding storytelling and play.

That being said, there’s no way to make a game, or any piece of media, that suits the needs of every member of a group. The best you can do is identify where you need to lock certain design elements in and where you can provide flexibility so that players can make the choices that work for them. 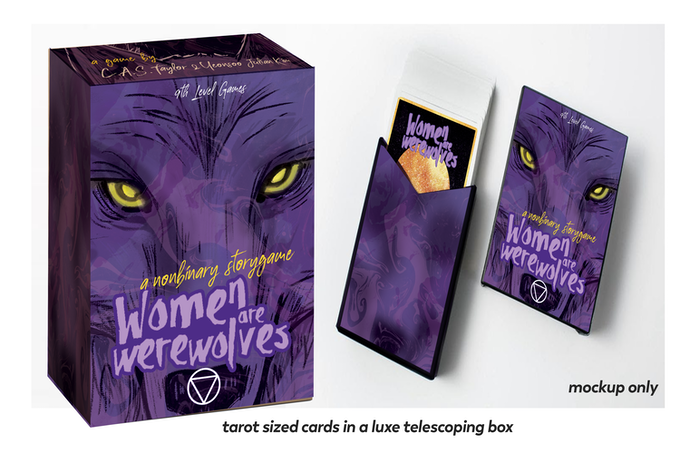 This game uses werewolves as an metaphor for a feminine gender role. Werewolves are an element we chose to lock in, as is the family’s attitude that werewolves are inherently feminine instead of inherently masculine or gender neutral. Because werewolves are often depicted as masculine in media, making them a feminine monster subverts ideas of the masculine and the feminine from the start. Once this new foundation for werewolf mythology is established, players are then asked to dismantle its gender essentialism. Our hope with this narrative framing was to encourage players to rethink what gender and gender roles truly are, and how both individuals and family groups relate to them.

We make lots of room for players to imagine their own werewolf lore too. While the prompts ask leading questions of the players, we worded each of them so that there could be many possible answers. For instance, one of the prompts reads:

When you were younger, you met another family that is similar to yours and made a friend. You still keep in contact to this day. Who are they and why are you envious of them?

One player might decide that the way in which this other family is similar is that they also have members who transform into wolves or another animal, while another (in a different playthrough) might decide this other family isn’t supernatural at all but has similar dynamics. In this way, players also have control over how unique their family’s situation is. Are they the only family with werewolves in the whole world as far as they know, or are they part of a larger community of werewolves?

Additionally, the milestone after which characters with wolf forms start to transform is randomized during set-up, but players always have the choice to discard the milestone if they don’t want it in their game for whatever reason and select a different one. Likewise, any card that comes up during play can be passed over in favor of drawing a new one if any of the players would like to exclude its content from the game. This serves both as a safety mechanic and a narrative mechanic that allows players to skip over prompts that might contradict lore they established earlier or that doesn’t fit into the story they are trying to tell.

One of the other design elements that we decided would be true for every game is in the title itself: Women are Werewolves [1]. This is the core gendered belief that every family in every game of women are werewolves shares, and the core attitude that players are meant to be in conflict and conversation with. We hope that new players, whether or not they identify as queer or non-binary, find meaning in playing out this conflict openly. Since we began designing the game, we’ve learned so much from the conversations held among our playtesters. Now that Women are Werewolves [1] has been successfully funded on Kickstarter [1], we look forward to hearing even more about what the game means to its players as we bring it to a wider audience.