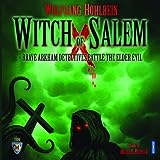 Cooperative games are popular these days. Playing against the game so that the players win or lose collectively is appealing in a day and age when people even compete with each other for the best Christmas light displays. In Witch of Salem, the players take on the roles of occult investigators working against the evil sorcerer Necron, who intends to open inter-dimensional gates to allow the Great Old Ones into our world to wreak havoc. Sounds simple enough, doesn’t it? Trust me, it’s never that simple.

The board shows a representation of the fictional city Arkham, Massachusetts. There are eight locations the players can visit; Miskatonic University (also the starting space), the Sanitorium, the Arkham News offices, the Witch House, the Hotel, the Cemetery and the Church. The eighth location is the sunken city of R’lyeh, which players will only visit in the end game phase to prevent the Great Old One there from bursting through. The object of the game is to find the hidden gate locations on the board, ward them so they can’t be opened by Necron and his minions, and return to Miskatonic University to close the final gate, foiling Necron’s foul schemes.

Players on their turn may move to any location still present in their movement deck. Each player has their own deck showing each of the seven main board locations, plus a “secret passage.” The “Secret Passage” card may be used to visit any location on the board, and is also the only way a player may get to R’lyeh. Once a player has spent the card for a specific location, she may not visit that location again until she returns to the Miskatonic University space, at which point her entire location deck is refreshed. At the start of the game, a first player is chosen; that player remains the first player throughout the game. On the first player’s turn, two monsters are drawn from the deck and placed on the first available locations – in ascending numerical order. There are two of each monster in the deck. The monsters are something of a distraction, but a powerful one; if at any time the second copy of a monster already on the board is drawn, that creature becomes “activated;” players must collectively discard specific items listed at the bottom of the monster card as a penalty. Items are used to destroy monsters, including the Great Old Ones, and there is a finite supply that is refreshed only seldom during the game; losing items therefore can be costly, but not closing gates is costlier!

Each of the six main locations has the potential for a gate. There are six locations needing a potential gate token, and there are four each of brick walls and gates. Sealing a brick wall results in actually opening a gate, so players must first peek at the counter using the magic glasses (one of the items) before deciding whether or not to seal it. Miskatonic University has a gate already in place; in can only be closed once the Great Old One has been banned. The other gates can be sealed using one of three warding devices keyed to that location. The warding devices like the rest of the items in the game, can be picked up at the six main locations. Items are drawn from a bag and seeded at each location to start the game. Only when a location’s item supply has been exhausted may more item chits be drawn from the bag to replace them. Each location has three potential items. Generally, the first item costs nothing to pick up; the second and third usually require a sacrifice on the part of the player – the loss of one or more points of sanity or allowing the cultist marker on the Necron Track to advance.

This is a challenging game with a great deal of replay value. Winning isn’t easy; in fact, players can expect to lose the first couple of times through as they get used to the way the game works. There are many different elements to keep track of in the game, any of which can hurt the players if left unchecked. Players have to work together to achieve victory over Necron. When I first saw the title, I was curious to see how similar it really was to Arkham Horror; aside from the setting and general subject matter, the only real similarity I encountered is the need to close gates. Even though we got soundly spanked the first game we played, I found this game intriguing and enjoyable, and am more than ready for round two. Watch your back, Necron!

Published by Mayfair Games, Witch of Salem is a game for two to four players of ages 12 and up. Mayfair Games graciously provided me with a free review copy; even though we got soundly spanked the first game we played, I found this game intriguing and enjoyable, and am more than ready for round two. Watch your back, Necron!

Flames Rising is happy to include this review in the Game Cryer Gift Guide [2] for 2009. Stop by the Gift Guide for more reviews and gamer gift suggestions.