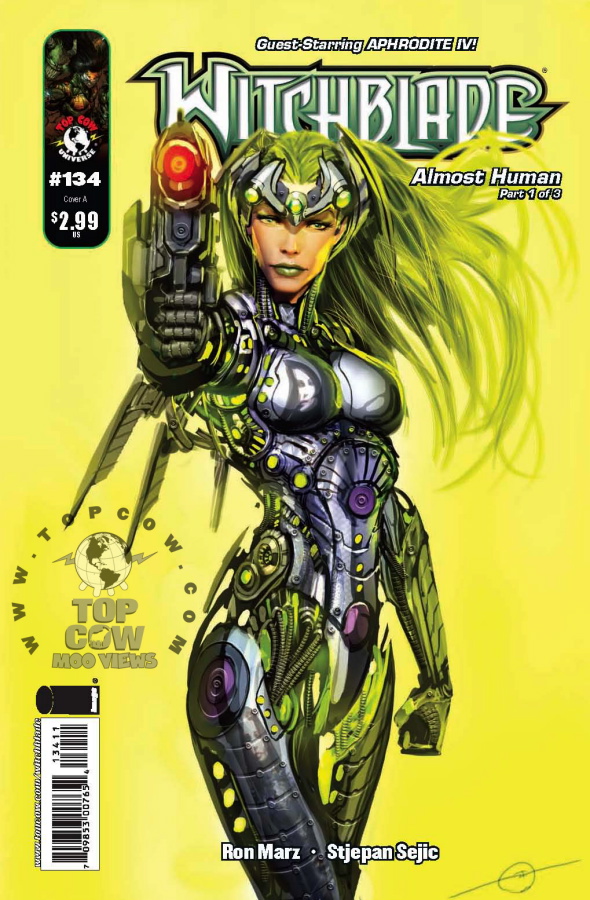 A new three-part arc is launching on Witchblade, featuring the assassin who (apparently) attacked Sara Pezzini earlier in the series: Aphrodite IV. The green-haired, probably mechanical assassin is hunting a fleeing scientist for a shadowy organization, and after a witness sees her get shot by a space ship that then disappears, Special Cases is called in to investigate. Sara and Gleason hit a lot of dead ends with their attempts to figure out either the weaponry or where their quarry may have gone until Sara recalls a mysterious contact: Argent. After a chatty phone call in which much is revealed (except for Argent’s real identity), Sara decides to go solo and investigate on some leads without calling to let Gleason know where she’s headed.

Issue #134 doesn’t have the same kind of draw that the first issue of “War of the Witchblades” had, possibly because it’s just not as large an event in the universe. The three-part arc is mostly a guest-star showcase, I suspect, but there are really nice things about this issue worth mentioning. First: Sara Pezzini is back in jeans. She’s wearing street clothes and acting like a cop rather than being fully immersed in the power of the Witchblade (until her solo mission near the end of the issue). The panel work and art by Sejic is, as usual, superior, and Marz provides him with good material for showing not only action, but emotion. Sara and Gleason are recovering from the set-backs their relationship suffered when Sara was overwhelmed by Darkness, and it’s great to see a smile on Sara’s face in some panels. There’s also a wonderful moment at the precinct where Sara flips off a chatty parrot that they haven’t gotten around to getting rid of.

At this stage, it’s a likely guess that Sara and Aphrodite IV are going to have to end up working together rather than killing each other, and some resolution may come to the earlier story line. Sara never got to find out who Aphrodite IV was before, so there are opportunities here for the Witchblade and the Assassin to come to terms with each other, rather than remaining antagonists. But whether or not that’s the direction this arc is headed is still anybody’s guess: as the issue closes, the two are still locked in combat, despite being surrounded by another enemy. It’ll be interesting to see where this one goes, though it definitely doesn’t have the kind of depth that made the “War of the Witchblades” arc really special.